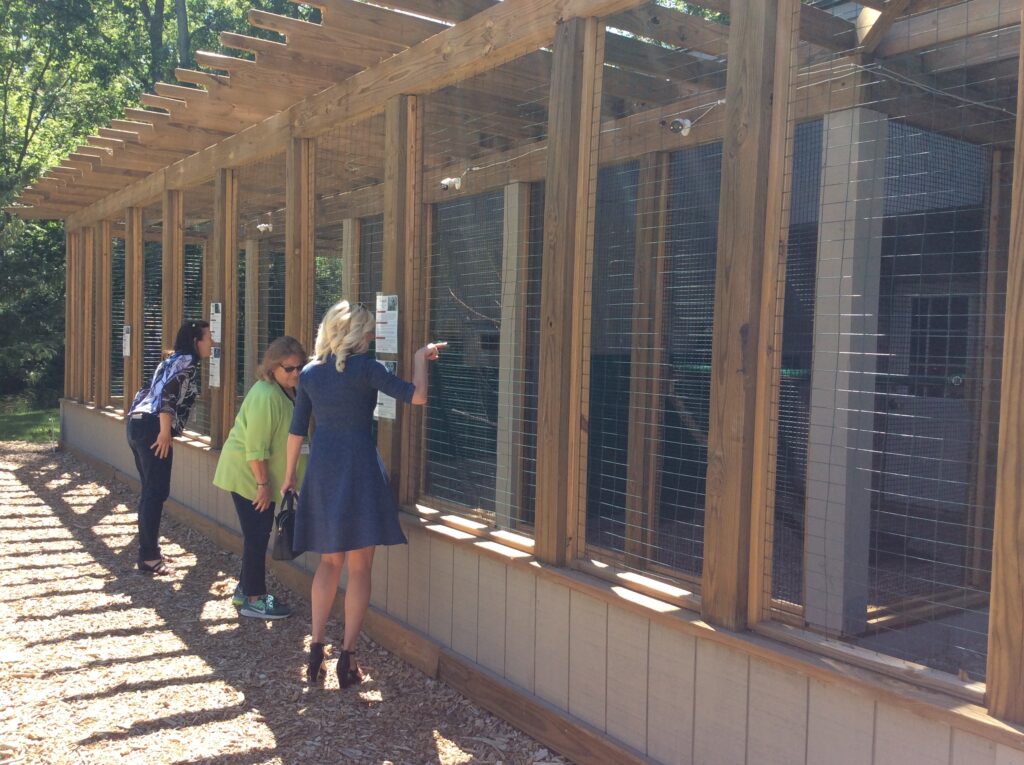 (TROY, MI) JUNE 2021. The Troy Nature Society (TNS), a nonprofit organization,
recently completed a three-year project to construct a permanent home at the
Stage Nature Center for five rehabilitated owls. In 2018, the Society adopted the
owls from a local organization that was in the process of disbanding and could no
longer care for the owls. The three species of owls are different ages and each was
found with various injuries that prevent them from living in the wild and taking care
of themselves.
While waiting for their new home to be constructed, the owls where housed in a
temporary location at the nature center and began serving as Educational Animal
Ambassadors as part of the various public nature programs offered by the Society.
The newly completed structure has been a project that friends and supporters of
the Society had anxiously awaited along with many residents of our community.
Visitors from all over now have the opportunity to view these magnificent birds of
prey in their enclosures from dawn until dusk daily.
Leading the dedication ceremonies were City of Troy Mayor Ethan Baker, TNS
President David Lambert, TNS Executive Director, Carla Reeb and TNS Assistant
Naturalist, Christina Funk. As part of the ceremonies, Funk introduced one of the
barred owls to the group of approximately seventy invited guests which included
Troy City Council Members, city administrators, donors and staff of the nature
center. Also addressing the guests were two enthusiastic young people who
conducted successful fundraisers in support of the owls.
Early in 2018, the Society’s fundraising efforts were kicked-off by Wyatt Lucas a
local Boy Scout from Troop 1036 who was just 15 years old at the time. Wyatt and
his family are avid fans of the nature center and active in various community
organizations and events. Wyatt was passionate to see the new home for the owls
get built and began organizing numerous fundraisers including a returnable can and
bottle drive, designing owl t-shirts to sell along with launching a Facebook
fundraiser to collect donations which eventually raised over $15,000 towards the
construction of the structure. Now an Eagle Scout, Wyatt continues to be
passionate about the owls.
In 2019, another enthusiastic young person, Janaire Rowland stepped forward to raise over
$1,400 in funds for the owls through fundraisers which she held at her school.  Janaire was
ten years old, a fourth grader at Hamilton Elementary School in Troy and determined to
help out the owls she loved.   Janaire conducted bottle drives and collected donations from
fellow students along with recruiting family members to put donation jars at their
workplace.  The Society along with Janaire’s family members, fellow students and teacher
couldn’t be more proud of her unselfish efforts.

A total of $145,000 in funding was secured for the large structure that contains
three separate enclosures. Fundraising efforts were headed by members and
friends of the Society in the amount of $50,000 along with $95,000 in financial
support from the City of Troy.
The Society’s Executive Director, Reeb commented, “This new permanent Raptor
House will serve the needs of these current owls and will be a home to any future
raptors in need of care. The daily medical care and feeding of the raptors will
necessitate the Society to continue extensive fundraising efforts monthly to ensure
the special needs of these owls are continually met.”
The Stage Nature Center is operated by Troy Nature Society a nonprofit
organization committed to providing educational nature and science programs. The
nature center exhibit hall is open to the public Tuesday through Friday from 9:00
am to 3:00 pm and Saturday from 10:00 am to 4:00 pm, excluding holidays.
Walking trails and Raptor House viewing are open daily from dawn until dusk. To
make a contribution in support of the owls’ care, feeding and medical needs, visit
troynaturesociety.org/get-involved/owls/ or call 248.688.9703.